“I remember calling my mother and her saying, ‘I think it’s just going to be this way for you. You are going to have to embrace it and work it out. There are so few women who have done what you’ve done—you’re so far ahead of everybody else. There’s not going to be anybody who’s going to catch up with you,'” said retired Admiral Michelle J. Howard, U.S. Navy.

As Howard was coming up the ranks to eventually become the first African-American woman to reach the rank of both three and four stars in the Armed Forces, and being the U.S. Navy’s first African-American commander, she found herself overburdened with duties that were passed off to her rather than her male counterparts.

Overcoming adversity in male dominated fields is a challenge many women, including Howard, have made great strides in. But there’s still work to be done.

For the past four years, KPMG has championed this effort by bringing more than 300 women attendees together at the KPMG Women’s Leadership Summit to not only discuss what barriers to break next, but how to lead the way.

These women, nominated by the CEOs in their organizations, hailed from more than 80 top companies that represent some of the biggest brands in the world. The event ran in tandem with the KPMG Women’s PGA Championship, a women’s major which hosted 156 of the world’s top golfers this year at historic Kemper Lakes Golf Club.

The speakers and sessions at this year’s Summit featured a carefully curated mix of pioneers across business, sports, politics and media. And though their career trajectories and accolades run the gamut—from CEOs, to an Olympian gold medalist, to a four-star Admiral of the US Armed Forces, to the 66th US Secretary of State—their stories of perseverance were ripe with applicable, indispensable lessons for today’s up and coming women leaders.

“The purpose of this event is really very simple: We want more women in the C-suite,” said Lynne Doughtie, U.S. chairman and CEO of KPMG. 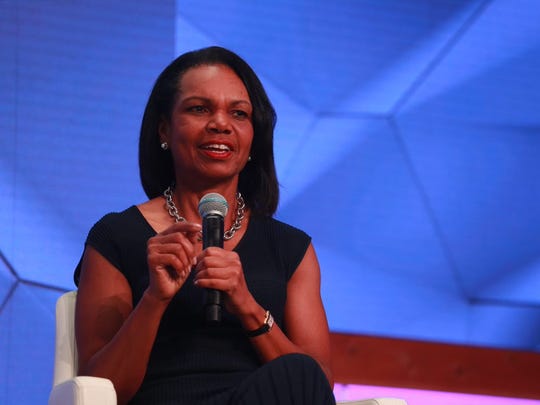 Many of the speakers at the KPMG Women’s Leadership Summit pursued career trajectories that had very few, if any female predecessors. Dr. Condoleezza Rice, 66th U.S. Secretary of State stressed the importance of showing the next wave of women leaders that it is possible.

“When you bring women together at events like this—women who are clearly advancing in leadership roles, and women who have already achieved as leaders—it shows you’re not alone. That there are a lot of women who have been successful. I hear so much about glass ceilings, about the struggles of being a woman and succeeding, and I want to say: ‘Look at all the women who are succeeding.’ Yes, we do have a lot more work to do. But it is possible to succeed. And in order to see yourself as successful, you have to see stories of success,” said Dr. Rice.

An event focused on empowering women may not seem very novel to today’s young women. But Nancy Kerrigan, two-time Olympic medalist and U.S. national champion, U.S. Figure Skating, reflected back on a time when this was not only an uncommon occurrence, but an entirely unrecognized need. “When I was young, there was nothing like this. To be a witness to such positive changes, seeing women communicate and be willing to help each other instead of knocking each other out of the way to get to the top is fantastic. It’s amazing to be part of something so positive; just to help each other is huge,” said Kerrigan.

Digging deep to find your purpose 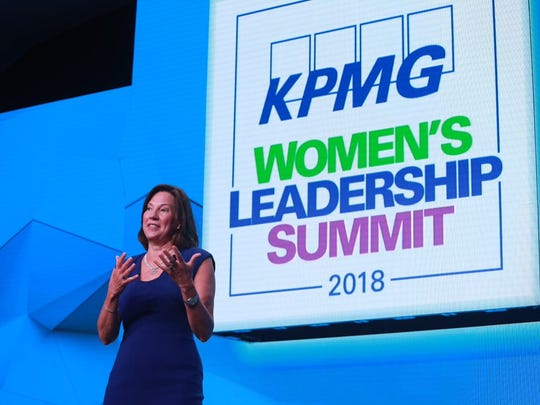 The most effective, impactful leaders are those who not only know their strengths, values and purpose—but how to leverage those gifts to create a positive change in their respective fields. Lynne Doughtie, U.S. Chairman and CEO of KPMG shared her story of a recent revelation on how to identify these talents. “‘Prioritize the things that only you can do.’ That advice prompted me to rethink what those things are—and that has so much relevance to inspiring greatness. Time is precious—not only the years, but the day to day, the moment by moment. Knowing clearly what only you can do requires you to dig deep, ” she said.

The advice Doughtie shared challenged attendees to recognize the individual talents that make them assets to their companies, and figure out how to leverage those qualities to become more effective leaders, personally and professionally.

Not only is sense of purpose a key leadership skill, it also impacts the productivity of employees and teams. “Purpose is the single most cost effective performance enhancer organizations have. There’s a wide array of research in Economics and Social Psychology in many, many fields showing that when people have a sense of purpose, of why they’re doing something, they do it better,” said best-selling author Dan Pink.

An active way to identify this? Pink suggested an exercise called ‘What’s Your Sentence?’ “A great person is a sentence—the idea is to describe what you do and who you are in a single sentence. An example would be Abe Lincoln: He preserved the Union and freed the slaves,” he said.

The importance of workplace diversity

In one of her first public interviews, a journalist asked Admiral Howard, “Why do we need women on ships anyway?”

Eric J. Foss, Chairman, President and CEO of Aramark not only had the answer—but the stats to back it up. “Diversity is the one thing, maybe the only thing we all have in common. When you look at what needs to happen in society and in business, it is imperative for us to make sure diversity and inclusion is front and center. Companies that really embrace diversity and the whole concept of inclusion are going to have better returns—35 percent higher than the median average to their industry,” he said.

But it’s not enough to talk about why we need more diversity and inclusion in the workplace; there needs to be a clear path for how to get there, a point Julie Sweet, CEO of Accenture North America, stressed during her panel. “You can’t set a target and then think it’s going to happen. What business objective comes without a number attached to it? We believe having a diverse group of employees is a business imperative. Our clients want it, we’re an innovation led company. So we invested in HR to support different and alternative sourcing,” she said.

Men’s role in this conversation 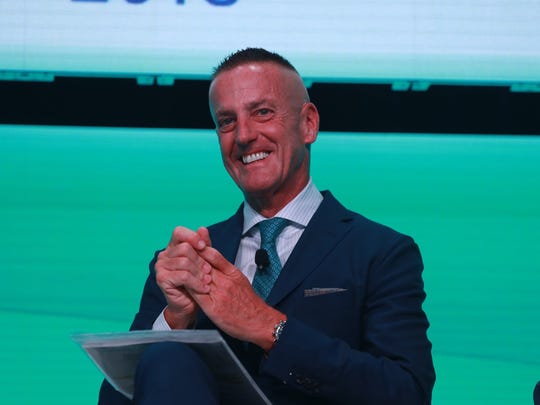 Getting more women to the C-suite can’t be done alone. This year, KPMG added a number of male panelists to join the conversation on empowering the next generation of women leaders, including Dan Pink, best-selling author; Eric Foss, Chairman, President and CEO of Aramark.

“As a father of three daughters, workplace diversity is certainly something I spend a lot of time thinking about. That, coupled with my role as a CEO gives me a big responsibility to make sure it’s front and center in a lot of things I do personally. It’s something I have a real passion for,” said Foss. Hiring initiatives at Aramark reflect that. Over the last five years, the company’s population has been 70 percent diverse, 58 percent female diverse.

And as Pink put it, why wouldn’t you want to create an inclusive culture where people spend most of their time? “The U.S. workforce is more female than it’s ever been in our entire lives. If you think about the workplace in general, we spend half of our waking hours there. It gives us the opportunity to create workplaces that go with the grain of human nature rather than against it, and allow people to be their best selves, to do great work and still lead good lives. I think that younger women especially are the people who are going to build that.”

But for many women in business, this can feel like a tough topic to broach. Jennifer Morgan, President, Americas and Asia Pacific Japan and Member of the Executive Board at SAP stressed the need to make these conversations a priority. “Men have to be part of this conversation. And a lot of them want to be. It’s about leadership and networking, and we need to bring both [men and women] to the table. It’s important for women to invite men to these conversations and get their insight. That can happen casually at the office or out and about—or at events like this,” she said. 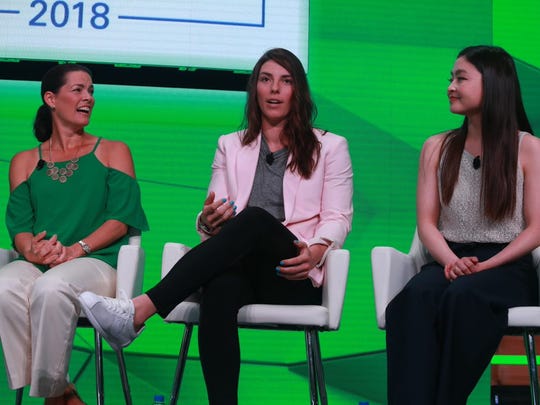 For women leaders in any line of work, the path to greatness is often challenged by setbacks and stacked odds. This is especially true for women athletes, whose career success hinges on their ability to persevere—something that Maia Shibutani, Olympic medalist, U.S. Figure Skating has plenty of experience with. “You can learn lessons in resilience in anything you do, but in figure skating where you fall and you have to get back up again, it’s a natural component. You’re always going to come across obstacles and challenges, but just keeping that goal in mind pushes you to get where you want to be,” she said.

For Hilary Knight, Olympic gold medalist, U.S. Women’s Hockey, it was a lesson she learned at a very young age. “I grew up in what is still a male dominated sport. In breaking through that ‘ice ceiling’ so to speak, I know a lot of people will tell you that you can’t do something. But if you have confidence in yourself and the right people around you, you’re surely capable of doing it. Resilience is something that’s instilled at a young age, especially when you have to persevere through these different obstacles. Fortunately, we’re changing the world now so that the younger generation doesn’t have to embark on all the same journeys that we do,” she said.

Greatness already exists within the next generation of leaders. Inspiring that greatness happens by bringing together women who have already achieved it to speak to those who can and will—with the right amount of resilience and grit.

“In pioneering positions, there’s going to be challenges along the way. So before you start that journey, you have to commit. You better have a sense of humor. You better have a strong sense of self, and be confident in that. And you have got to get rid of mental baggage. In the pioneer days, women would throw things out of the wagon as the trip got longer to lighten the load. If you’re going into a pioneering situation, you have to lighten your load early,” said Howard. 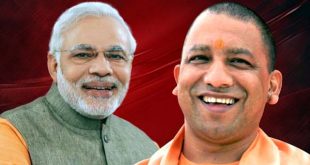 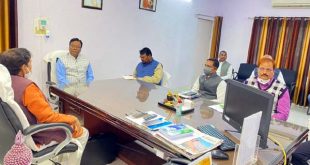 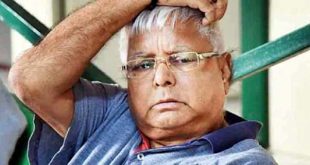