Most of those travelling to Egypt come because of a deep fascination with its ancient history. However, Egypt boasts very strong and varied cultural influences, with the most prominent also being Coptic and Islamic.

One needs to simply take a walk around modern Egypt and look carefully at the architecture where it becomes common to spot a fragment of Quranic inscription etched on a mural or particular house adorned with geometrical and arabesque shapes. Not unique to Egypt, the Islamic artistic legacy can still be felt across most of the Muslim world, in countries such as Turkey, Iran, Syria, Pakistan, India, Egypt and Morocco, where such fine Islamic art remains alive and enduring. 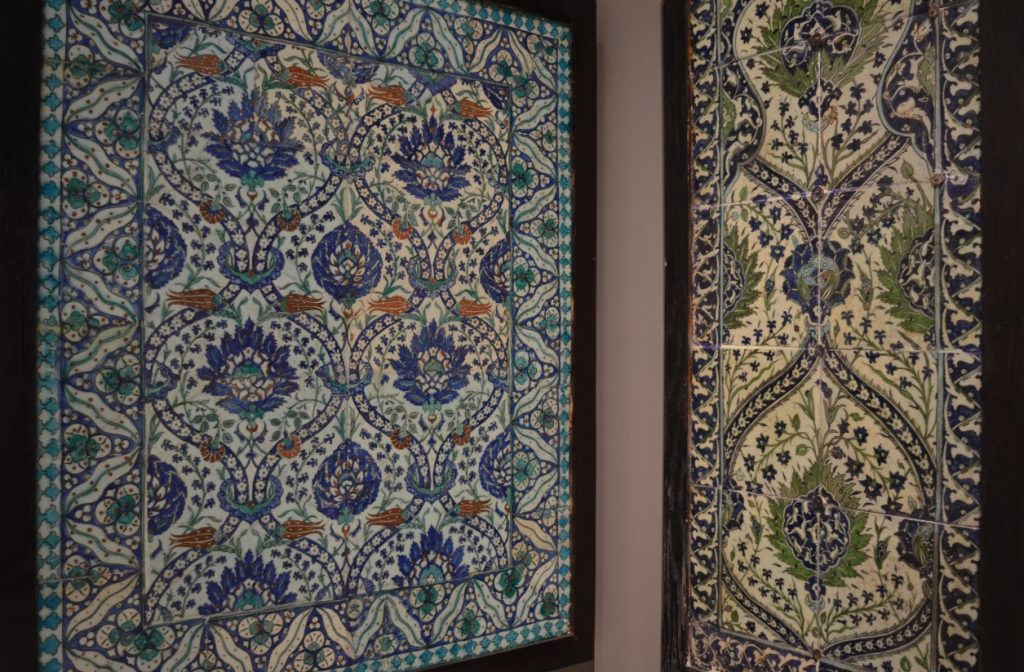 To enjoy it fully, one can also take a few hours and visit the Islamic Museum in the heart of Bab-el-Khalq. It is not hard to find the museum as it’s quite large; the main entrance is on Port Said street.

Initially, the museum gives the impression of being spacious, pristine and modern. Once one starts studying the display of the artefacts, there seems to be a logic behind the organization of the display as to accommodate the artefact’s sizes. The smallest exhibited there would be, to the untrained eye, a golden pin whilst the largest items constituted marble fountains. 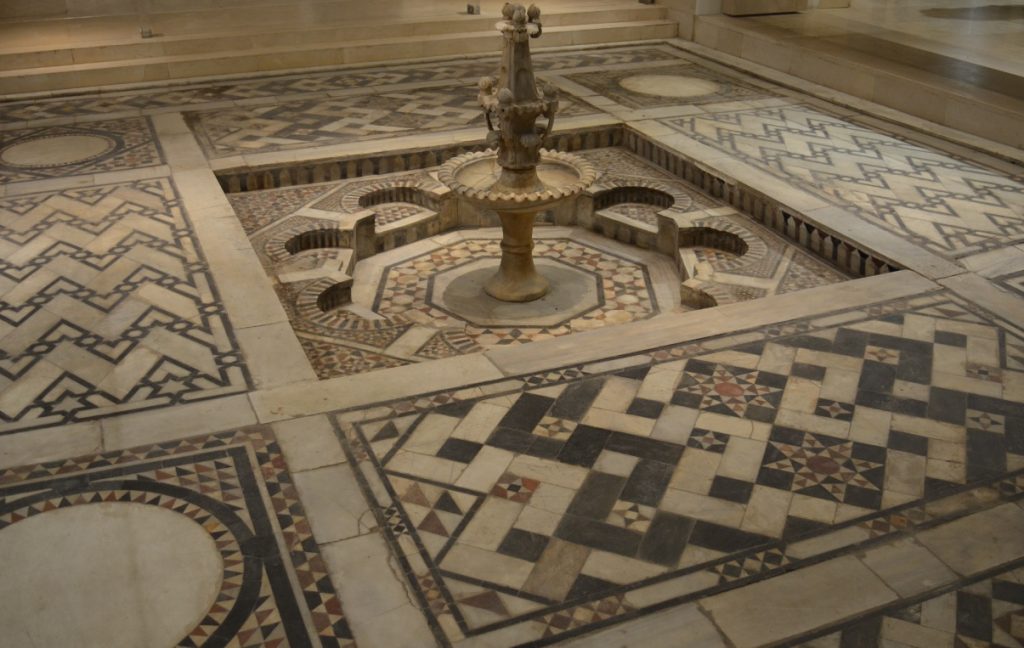 Nonetheless, there is a clear layout to the museum as exhibit by the institution’s brochures which reveals the establishment is divided into several exhibition layouts according to a specific theme: introductory hall, Ummayad and Abbasid section, Fatimid, Ayyubid, Mamluk, Mamluk to Ottoman, Ottoman to Mohamed Ali, coins and weapons, eastern Islamic world, calligraphy, textiles and carpets, daily life, water and gardens, science and finally medicine. 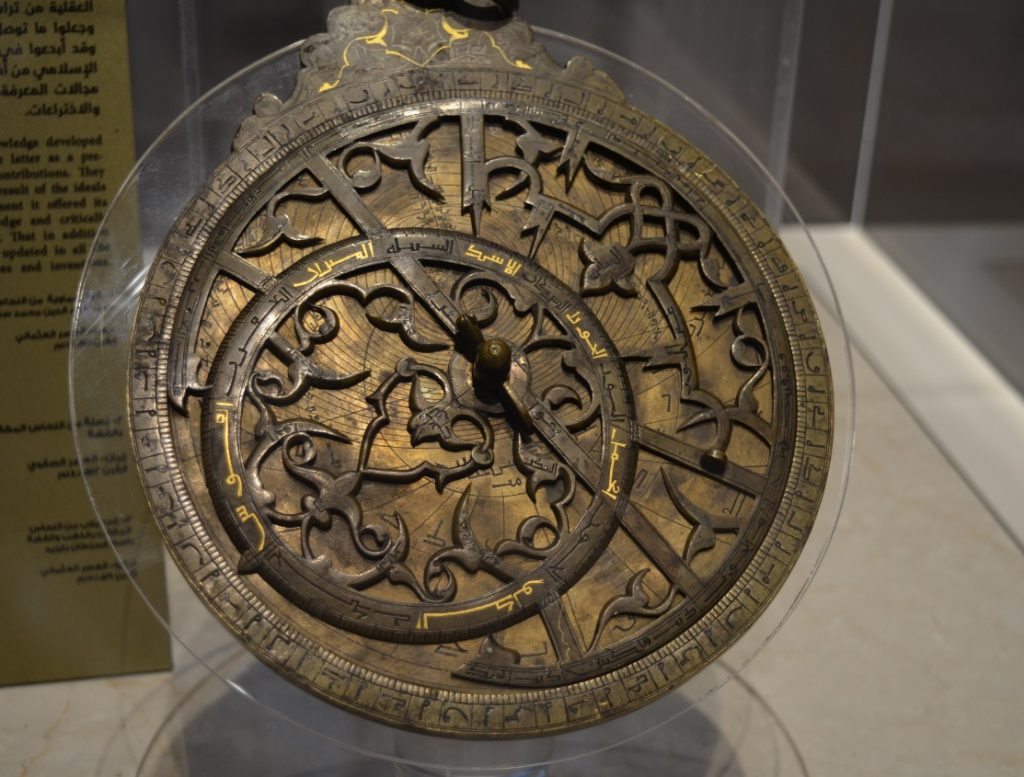 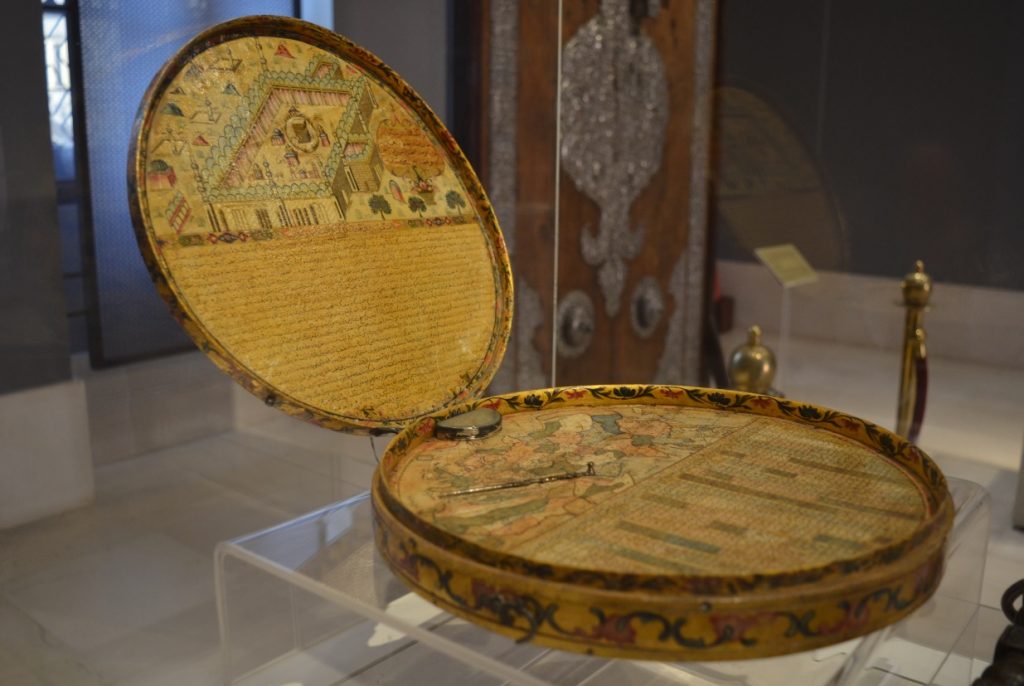 The museum is essentially divided into two wings. On the left, the exhibition halls feature an array of endless decorated vases as well as ceramic bowls mainly originating from 13th century Iran. These vessels are meticulously decorated with hunting scenes adorned in coral paint as well as scenes of flora and fauna. On the walls of the first all are ceramic fragments featuring flowers in blue and creamy tones. 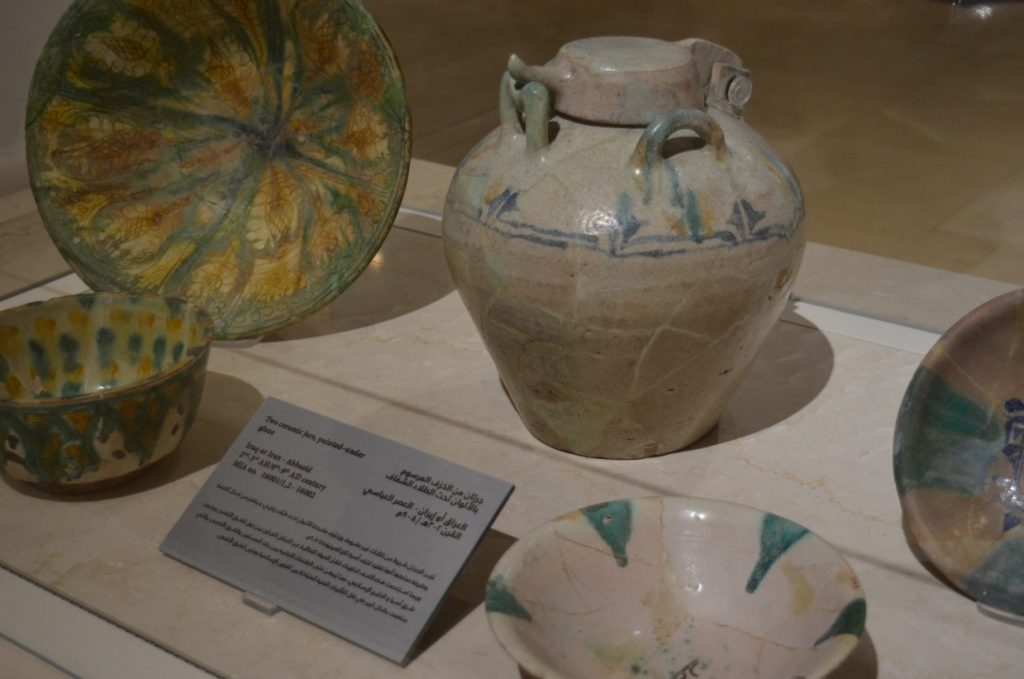 Additionally, one specific display case was dedicated to metal work, namely copper and steel ornaments such as statuettes, vases, and lids. 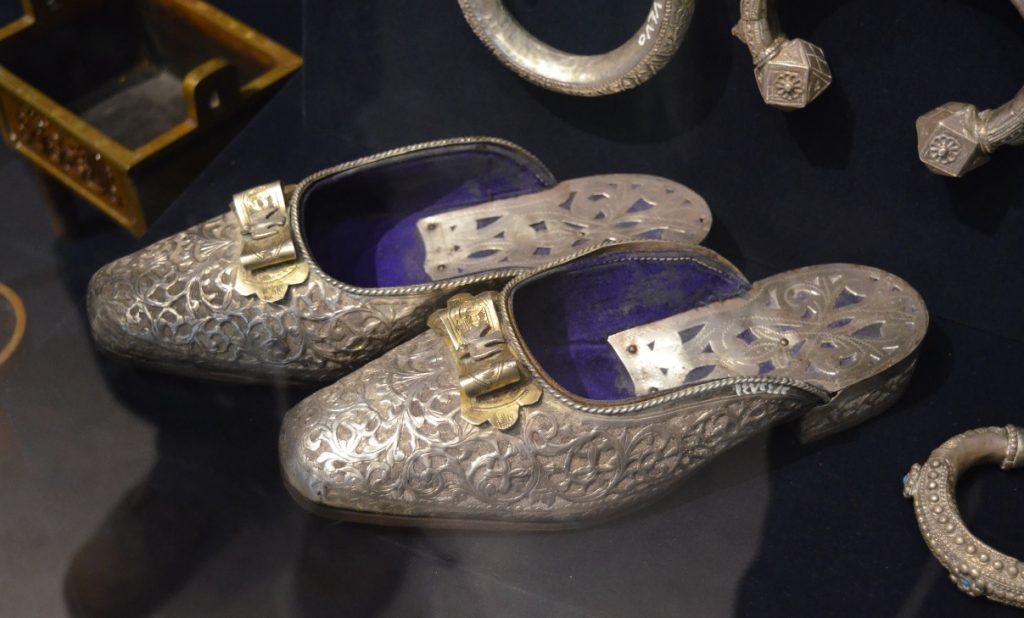 In a neighbouring room, an array of small and fragile trinkets, such as perfume glass bottles in vibrant green and orange, and surgical instruments are displayed. The latter are mostly manufactured from wood, ivory and bronze and date to the Abbasid period. There were also other tools such as astrolabes, dials, sand clocks and weaponry such as a steel shield and sabres. 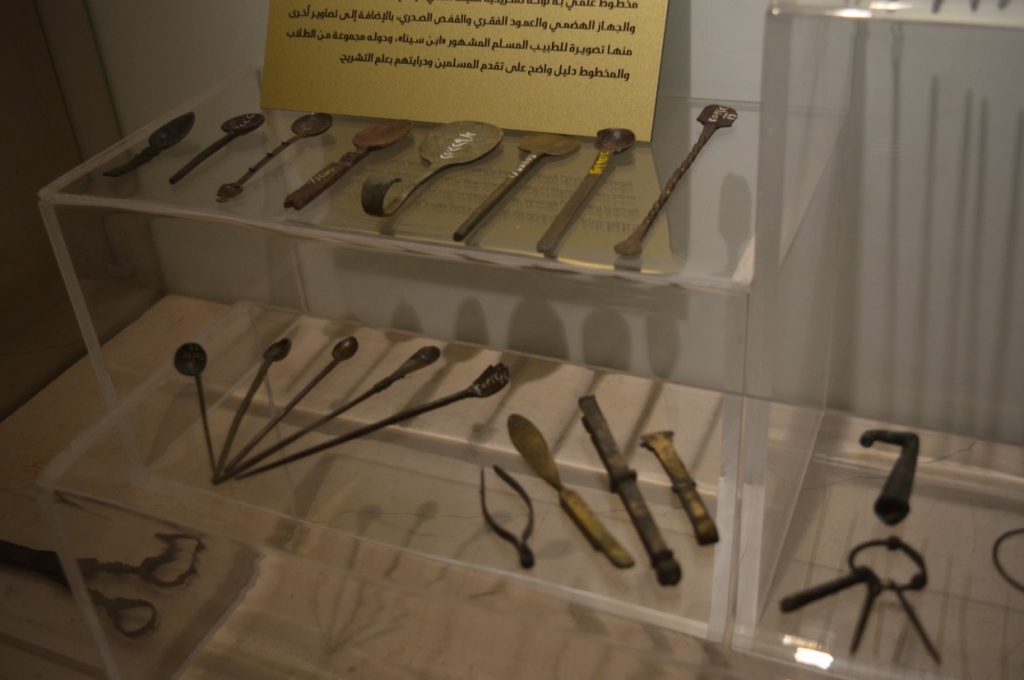 Due to the Islamic belief that depictions of human figures would result in idol worship; human representation is expectedly scarce in the museum’s artifacts. In its stead, the museum presents a collection of varied decoration patterns and calligraphy. This can be attested on some plaque foundations as well as marble tombstones. 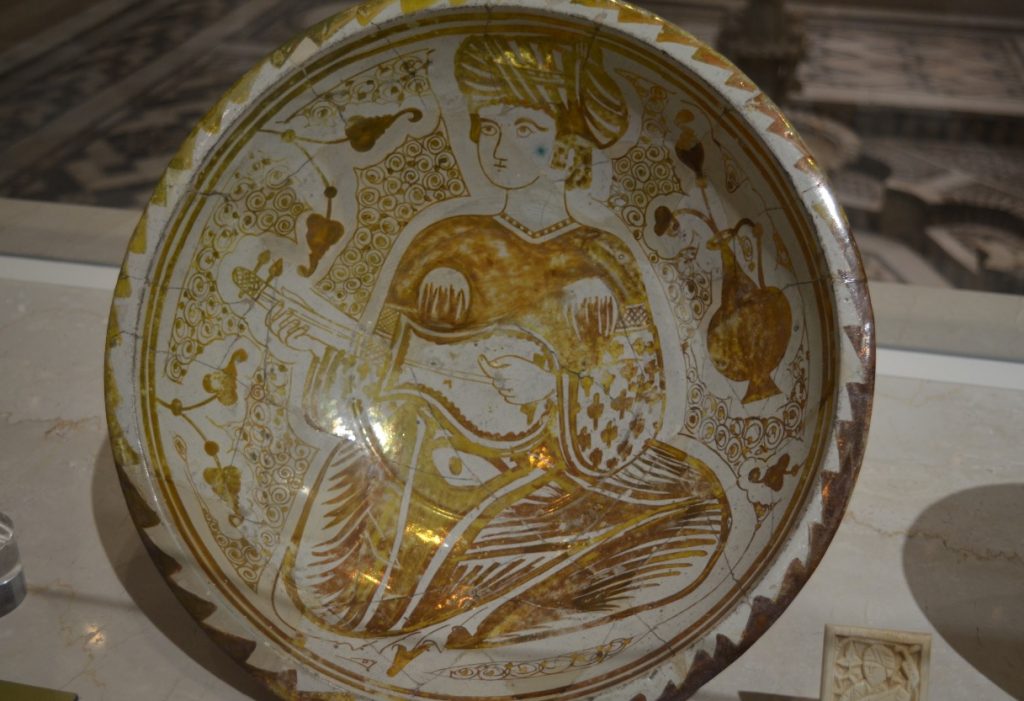 Visitors also would do well to take a peek at the different Quran manuscripts extant in the museum; the Islamic calligraphy on fine parchment paper is further embellished with gold paint tracing pages’ edges. 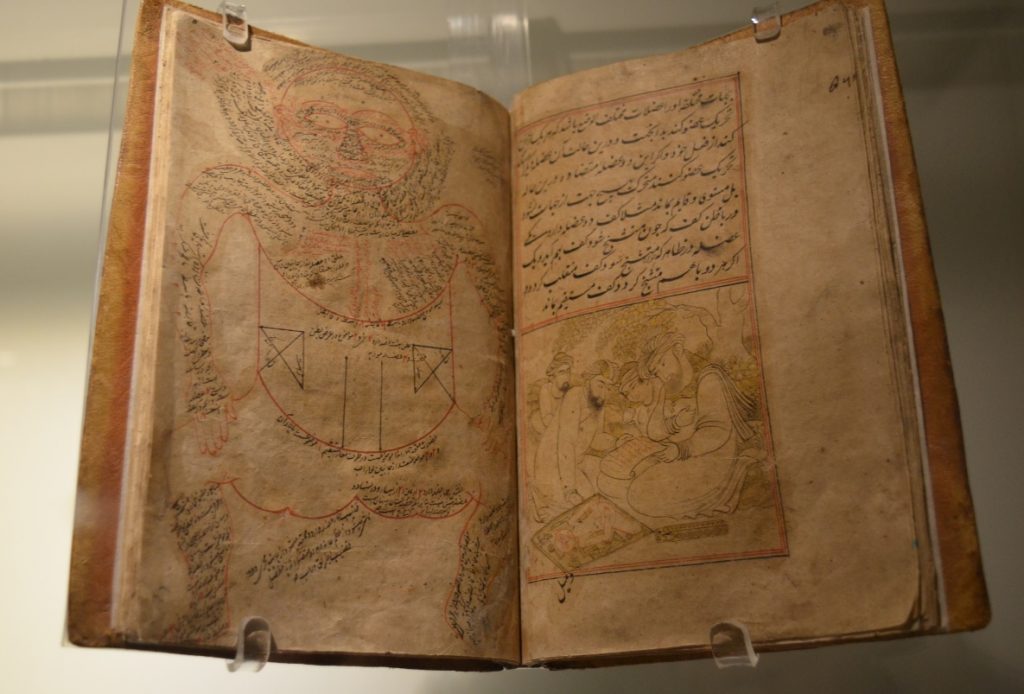 One of the most interesting exhibition spaces of the museum is the one near the entrance, where visitors can see artefacts, mainly pottery vessels, that were destroyed during the January 2014 bombing, in which a car bomb targeted Cairo police headquarters nearby. The artifacts have since been restored and put on display.

Egypt’s museums leave much to be desired, however, the Islamic art museum is one of the most pleasant experiences for sightseeing one could have in the country. Not only does the museum actually have active social media pages as well as a running website, a brochure for its layout, impeccably clean display cases, the staff is courteous as well.

Until today, it remains slightly unpopular in comparison with the Egyptian Museum in Tahrir and the soon to be inaugurated Grand Egypt Museum due to its location primarily.

A special excursion would also constitute visiting The Egyptian National Library and Archives, located at the museum’s back; it hosts over 50,000 manuscripts from Egypt and the Arab world.